A Conservative Latino’s View on Politics…

Did you know, one responsibility of central committees is to find and recruit candidates for office? I’m not sure how each caucus in San Diego County is doing, but my representatives in the 75th Assembly Caucus haven’t done this since at least 2016. That’s when I won a seat on the Valley Center Community Planning Group.

Candidate recruitment is a responsibility a central committee has. Yet, the 75th Assembly Caucus has failed to find candidates when there’re openings. They’ve provided no leads or help. I’m not criticizing. I’m stating a fact they know is happening. If elected, I want to help our caucus change this and have others use us as a template for candidate recruitment.

WE MUST STOP THE BLEEDING

Last cycle, we lost the Fallbrook School Board, and it’s fallen under Democrat control. While many may think it’s a small school board in a rural area, and rural country is red Republican country. The rural North County region of San Diego County is one of the few left in San Diego, still dominated by red districts. I want to take Fallbrook back and flip any blue districts.

If we don’t recruit candidates before we know we’ll shift from red to purple, and then we’re battling to keep a stronghold from turning blue. Once we lose rural areas, hope to flip the state goes from dismal to impossible for the next few generations. Fallbrook should be a warning sign.

Nonpartisan boards aren’t about party but community. Having representation that understands the big picture, regulations, laws, and process is something conservatives do better than others. I’ve done my share of recruitment with party leadership help because I couldn’t count on my central committee. As a central committee member, I’ll do everything to make candidate recruitment a strength. 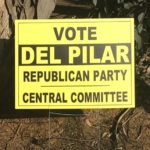 The past two election cycles, the San Diego County Republican Party has sent out notices looking for candidates for hundreds of positions. I imagine some don’t fall under central committee responsibility, but we must do our part to help lower these numbers.

I’ve been active since 2015 as a volunteer and elected member of a small advisory board. I’ve helped promote projects to bring jobs to my community. I’ve helped recruit conservative candidates who I now serve with, and I’m ready to take the next step to help the Republican Party take California back.

My name is William Del Pilar, and I’m running for Republican Party Central Committee to help the GOP reach a base they’ve struggled with the past 35 years.

Vote Del Pilar, if you live in the 75th Assembly District Caucus.